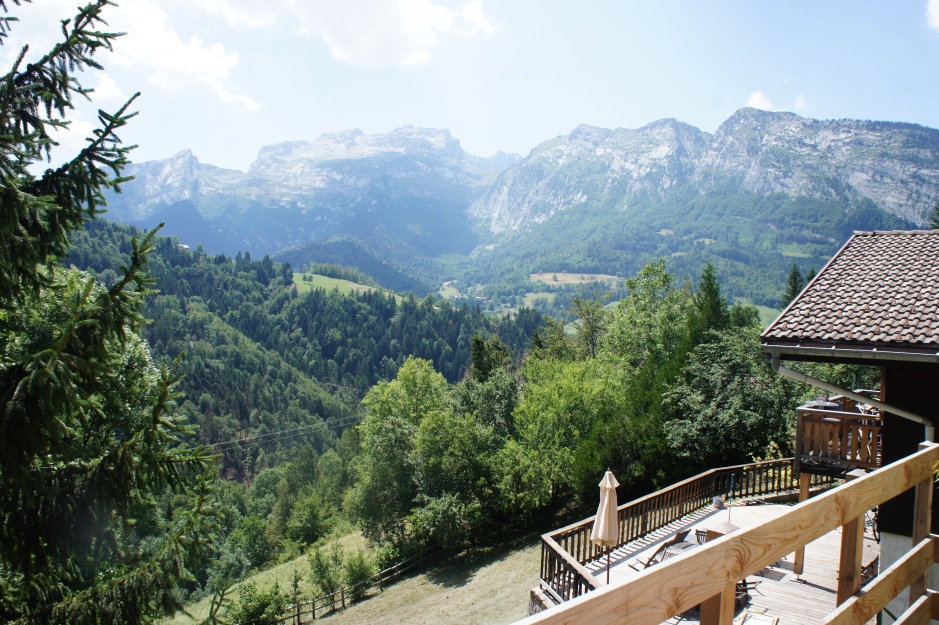 It was SO hot. Even as an Australian, even atop a mountain, it was hot.

Probably because of our budget, we made the call to stay outside of Annecy, at a guest house in the mountains of Manigod, about a half an hour drive from Annecy. We enjoy the smaller communes and here we felt like we had won.

We ventured into Annecy on Sunday, with the (completely non-unique) idea of checking out the market, buying some delicious picnic provisions and then sitting by the lac, swimming and enjoying our loots.

By 10.30am the centre-ville was swarming with tourists with the exact same agenda (uncanny!). It was like Times Square right before Christmas and gave us flashing, anxiety-inducing imagery of how we are to cope in future Moroccan medinas.

Sadie was on my back, in the carrier, pretending to be constantly on the verge of sleep when enquired upon (she weighs 16kgs), Rosie, who never complains, in a voice, so perfectly whiny it would suggest otherwise, insisted that she too be carried, because (and rightly), she never gets that opportunity and she never complains (that kid stores truths). As team managers (aka exhausted pack animals), we willingly made a motion to call the proposed agenda too ambitious and head home for an afternoon of down time which was spent in terrifying anguish whilst we hissed at the children to ‘STOP CLIMBING DOWN THE CLIFF TO CATCH THOSE KITTENS!’

Armed with the knowledge gained from yesterday’s fail, we woke early (easy with little people), and headed back into Annecy to take 2, this time at 8am in the morning. It was peaceful and there were barely any other tourists, and unfortunately no market either but we didn’t mind. We parked at the Hotel D’Ville and it was cheap compared to other places we’ve been. The street art was visible and the flower adorned bridges were bare, so the girls could run around freely and did not make demands to be carried.

Afterwards, we headed for the Lake, at D’Angon which was suggested to us by our lovely host, Aurelia. There they have a patrolled little stretch just beyond the private beaches. It cost us €5.60 as a family to ‘get in’ which I always find a bit funny… who owns that? But it was perfect. A little stall sold ice creams, drinks and snacks, pontoons were anchored close to the beach but far out enough to dive from safely and the views of the mountains were gasp inducing. The littles played happily in the shallows whilst we swam and read and were satisfyingly exhausted and happy to head home when the suggestion was made.

And home for the week was surrounded by jutting mountain ranges that have for me, an allure that I can’t quite explain or perhaps comprehend. The girls told us, emphatically that it was their most favorite place so far:
Us: ‘ah yes, we know; that view!’,
Them: ‘No, because of the cats.’.